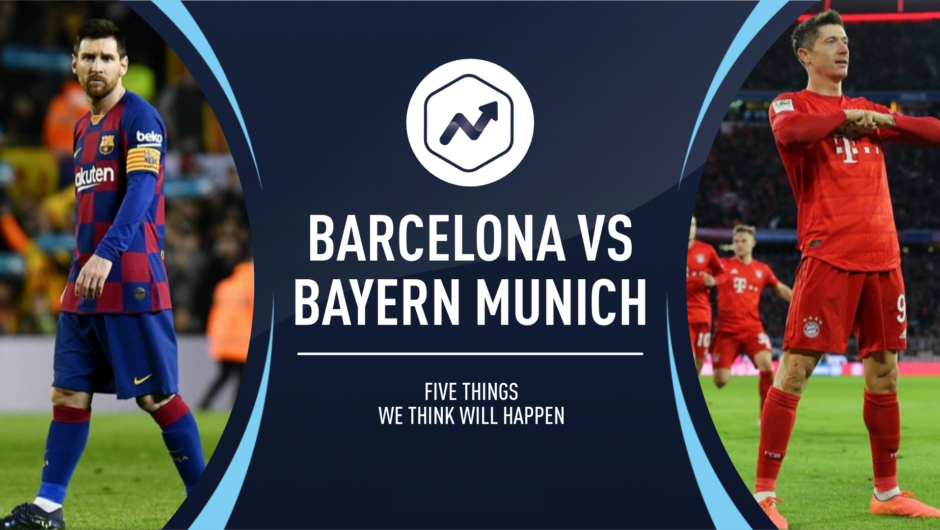 Bayern Munich vs. Barcelona is undoubtedly the blockbuster tie of the Champions League quarter-finals.

The two five-times winners are the only former European champions left in the competition and will go head-to-head under the Friday night lights. The match will showcase two genuine European heavyweights, including the best player in the world and the best striker in the world, and should be an enthralling contest. We’ve predicted five things we think will happen in Barcelona vs. Bayern Munich.

1. The midfield battle will be a treat

You don’t see too many fantastic midfield battles these days. As pressing and counter-pressing has become more of a thing, it’s hard for great midfields to come together and dominate games. Bayern Munich are an exception, as their dominance over the Bundesliga allows their incredible players to shine. Playmakers like Thiago Alcantara and Leon Goretzka dominate in all areas of the game.

Meanwhile Barcelona were the vanguard for great midfields, and although those standards are slipping Sergio Busquets is still a peerless force in the middle of the pitch (even if he needs more rest than he used to) and Frenkie de Jong is a blue chip, A-1, S-tier footballing prodigy. Obviously the third spot in Barcelona’s midfield could be equally fantastic, but even if they opt for Arturo Vidal over Riqui Puig there is still intense quality that comes with the Chilean and the narrative of him taking on his old side could be interesting.

Whichever way you slice it, this will be a midfield battle to savour. A fully rested Busquets going up against his old team-mate Thiago, who is coming off an all-world performance against Chelsea? The mouth waters!

Lionel Messi, the 19th most ‘valuable’ player on Football Index

One of the stranger narratives emerging about Leo Messi vs. Liverpool last season is that he had a bad game at Anfield as the Blaugrana crashed out from Europe. And sure, he didn’t have his best night but he was directly involved in every chance Barca had that night with five shots and three chances created.

Those three chances were all golden, as well, with the Argentine putting Philippe Coutinho, Luis Suárez and Jordi Alba into 1v1 situations with Alisson. His team-mates all fluffed their lines, and Liverpool made history.

Now Barcelona face down a Bayern Munich juggernaut, and they may be up against it, but Messi will certainly still manage to create chances. He always does. Especially if Bayern aren’t able to call on Alphonso Davies due to injury. The Argentine will always get his passes off, he’ll always wreak havoc, and it’ll be up to his team-mates to deliver the finishing touches.

3. Bayern will target the full-backs

The amusing thing about Barcelona’s defence is that most of it is actually pretty great. Marc-André Ter Stegen is one of the world’s best goalkeepers, Gerard Piqué and Clement Lenglet among the best centre-backs, and Sergio Busquets and Frenkie de Jong are masterful defensive midfielders, also amongst the world’s finest.

So why do Barcelona concede so many chances? Well, putting it charitably, their full-backs are less than stellar. Putting it more accurately, they’re bang average but playing in an offensive and expansive system that exposes both them and the defence as a whole.

Nelson Semedo and Jordi Alba are very promising going forward, and Semedo is a terrific 1v1 defender and decent on the cover, but neither know how to defend space. Alba is a problem because he can get played around by simple one-twos, and Semedo’s tendency to get sucked in and leave his man unmarked at the far-post is becoming legendary.

Bayern Munich will be all too aware that if they attack Barcelona in the space behind the full-backs, they will get plenty of joy. Quique Setién’s diamond formation (which he is likely to use against Bayern) exacerbates this issue as it asks both full-backs to constantly play very high up the field. The likes of Serge Gnabry and Alphonso Davies are going to have a field day running into those spaces.

With just one goal against Barcelona, Robert Lewandowski will become just the fifth player to score 50 Champions League goals for a single club, and the very first to do it for a team besides Barça or Real Madrid. He will also become only the third player ever to score in eight straight Champions League games. These would be phenomenal achievements, and in fact they will be phenomenal achievements because there is simply no way that Barcelona will be able to keep this man out for 90 (or 120) minutes.

“Robert Lewandowski is a player that has improved with age and although on the wrong side of 30, he doesn’t look like stopping any time soon. With a staggering 56 goals already this season and an incredible record in the Champions league, £2.72 could be a snip for him on Football Index. He takes penalties and often free kicks and scores goals for fun. He is however at the highest price he has been at in some time and it’s always worth treading carefully when buying players with specific games in mind as he could easily drop off if Barca were to get the win.

However win or lose, he is a solid hold for at least another season and his dividend returns should outweigh any doubt in his price. There are a few other players from Bayern that could be valuable holds, including Thiago, who is great for performance dividends and a likely transfer target for Liverpool, which could see his price rise.” – tipster Craig Rennie, of Football Index Elite

And while Lewandowski is setting records, the striker at the other end, the one striker who can claim to be definitively better than Lewandowski over the last decade, is going to cement his inexorable decline. Luis Suárez has been a legendary goalscorer for Barcelona, but age defeats everyone. Especially those who rely on their athleticism as the Uruguayan does.

Suárez has not scored a Champions League goal outside of the Camp Nou since September 2015. Literally half a decade ago. Since then he has played 1,896 minutes without scoring, taking 67 shots in that time. His profligacy will continue in Portugal, only highlighting his athletic inadequacy and how much of a detriment he is to Barcelona’s play as a whole.

When you look at all the above, there’s only one logical conclusion for Friday night’s clash: Bayern Munich will win. The Bavarians are just too strong and would have given a firing and in-form Barcelona a game, let alone the misfiring outfit that the Blaugrana are now.

Moreover, Bayern have a great record against Barcelona throughout history. In the eight matches the pair have played, Barcelona have won just two (at the Camp Nou in 2009 and 2015), drawing once and losing five times against the Bavarians. That bodes ill for their chances.

Finally, Bayern are in absolutely incredible form. The Bavarians have won the last 18 competitive games in a row. They’ve won 22 out of 23 competitive games this year. They’ve already picked up the Bundesliga and the DFB Pokal and will be looking to add the Champions League to secure their second-ever treble. Now whether they’ll go all the way is still up for debate, but they will beat Barcelona.